We knew that Pat wanted to spend his bday away. We just did not know where. Cold, hot? Europe, Caribbean? In the end, due to work deadlines and flight availability, we showed up to the airport on Pat’s birthday with our bags packed for San Juan, PR … The Shining Star … as the old commercials used to say. A three hour flight from Philly and no customs. No wonder we saw soooo many Americans throughout the weekend.

We stepped out of the airport into the most glorious weather we’d felt in months. 80 degrees and no humidity. I immediately stepped into sandals and shed my layers of sweaters and socks right there at the taxi stand. The cab ride was 15mins to our hotel by the convention center – not a good location. There is no sight in walking distance. There is a 75cents bus, but did we really want to wait for a bus?!? Every cab ride is $15. You do the math. We actually spent some time walking to get some exercise and feel the heat on our skin.

The first day we stepped into our summer’s finest and went to Old San Juan which is reminiscent of Lisbon’s old neighborhoods. We took a hotel suggestion to eat at Jibarrito, a casual place serving typical Puerto Rican food. OMG, this is the WORST FOOD EVER SERVED!! We ordered empanadas – one type with chicken, another type with beef and sweet plantain. They were greasy and small and flavorless. We could tell the grease was stale. Poor Pat barely recovered the whole trip after eating one chicken empanada. I myself never tasted it after I saw the look on his face. The beef empanada was pure insult to Puerto Rican food on the island as well as in the States.

Should we tell you here that we are no strangers to Puerto Rican food. We grew up around it in NYC. My first sampling was from the home cooked foods at the Puerto Rican Family Institute where my mother worked in the 90s. She was probably one of the only non-Puerto Ricans, but with her tan skin and her fluent Spanish, they let her do their books. One of her Puerto Rican co-workers even invited us to his home where he and his wife made me an aficionada of fresh made jugo de tamarindo – tamarind juice. Since leaving NYC 8 years ago I’ve had the joy to sample many Puerto Rican dishes, once again at the hands of Puerto Ricans. At WCRP, a former employer, my co-workers shared many delights at potluck celebrations. Homemade flan, pasteles, rice and pork medleys. Trust me, I’ve eaten the real thing. We even had a trusted North Philly spot called — Freddie and Tony’s Restaurant — which has the best maduras.

So Jibarrito was a disappointment to say the least – an abhorrence. The ingredients were not fresh. Oh goodness, I’m nauseous as I write. (Or that could be in part because we’re starting this post on our return flight. This landing is BUMPY!!!)

We then had to walk Pat to a cafe so he could eat a quick chicken sandwich.

Puerto Rican taxi drivers are super polite and gracious. Every single one opened our doors for us and most took my hand to exit. For some reason, taxis are 9 passenger vans. Kinda weird. Must be a waste of gas. My original point is that the steps are high and a helpful hand is always accepted.

We walked to the two forts in San Juan, actually entering El Moro. The views were gorgeous, the wind on an April afternoon whipping my hair across my face. Divine. We attempted some artsy pics. 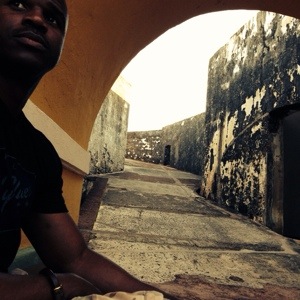 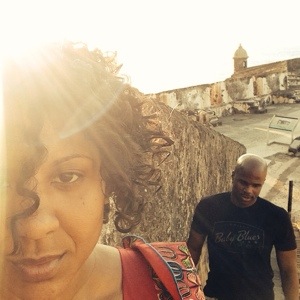 As we meandered away from El Moro down the winding streets of Old San Juan, we bumped into Marina and Ezugo, an American couple. Right there on a narrow sidewalk, we began talking with no prompting. They gave us a lovely food recommendation – Jose Enrique’s restaurant in Santurce. They warned of a long wait so we hopped in a cab in pursuit of a good end to Pat’s birthday. We were not disappointed. Three hours later, give or take 5mins, we sat in front of two lovely appetizers and two entrees. The wait was worth it. The flavors were so fresh and yummy.

And Pat was able to enjoy a birthday treat after all. (Side note: we bumped into an American father/daughter team while we all waited to be seated. The daughter, Dawn, had just bought a guesthouse in Culebre – one of the best island retreats in the world. Her place is Casa Pana in case you’re ever in town. The father is a 30yr retiree. We plied him with questions about how to lead a long retired life, but he smiled shyly at us. Another day, maybe we’ll learn. The one bit of advice he gave us was to visit Fernandez Bay Village in the Bahamas – Kat Island.)

Friday, we awakened and did some work for the man for a few hours. Sounds lame, right?!? Believe it or not, there is something decadent about working from a hotel room that overlooks a large body of water.

Later we walked to Condado. It felt like a Miami ghost town. Large colorful concrete buildings, but nobody was home. We came across the Vanilla Bean Cupcakery with mini cupcakes showing off some Caribbean flavors – dulce de leche, mango. My cupcake was delicious but too expensive for a mini. Deeper into the neighborhood, we found beaches. We sat and sat. People were wind surfing. There were many teenagers hanging out. The beach is to PR what the mall is to the US. The wind was crazy, sand in our mouths. We didn’t stay that long I admit because I was not having any fun. The water appeared too rough for my swimming skills, and there were no facilities close by. While it was cool to not be in a touristy space, I admit that I am a tourist who likes some amenities at the beach ie restrooms and drinking water. If I lived in one of the beautiful condos adjacent, I’d be in heaven. Odd note: we could not stop singing K7 and Big Pun.

From the beach, we taxi’d over to Marmalade, which is a sheeshee restaurant in Old San Juan. It was overrated. Our food was too salty, nothing implemented as we might have hoped. The mushroom soup was good even if it was salty. The service, though, was impeccable and the environment upscale and romantic. Rose petals were everywhere. I felt terribly under-dressed and filthy coming off the beach, but this was a Patrick surprise. After dinner we meandered into a square with live music and dancing. Beautiful drum beats and men, women, and children thumping, swaying, moving to pulsing beats and harmonic singing.

From there at 9PM we cheaply walked 3miles back to our hotel through some lovely sitting areas along the water, through graffiti’d barrios and desolate barbed wired properties where God knows what happens. It took us … awhile. But I’m glad we did not take a taxi. You don’t know a place until you see it at eye level without the protection and speed of vehicles and guides.

The next day, we rented a car and drove 2+ hours to the southwest coast of PR. With the help of the rental car staff, some best beach website, and pure dumb luck, we ended up at a lovely hotel/restaurant overlooking the water. Copamarina Beach Resort and Spa. We missed out on the ferry to Gilligan’s Island, but we were quite happy nonetheless. The food was not good, but the hotel had comfy lounge chairs at the shore. No one bothered us as we slept, listened to Maxwell, and ate ice cream. Down the road were many other beach outlets. Take your pick. The resort looked like a perfect place to get married.

Eventually we skiddadled back through the treacherously winding roads where people miraculously hold their lanes and went straight to dinner in Old San Juan again. We went to fish themed – Aguaviva. Pat had mofongo and snapper. He would say later that he never felt so badly for fish. It had been deep fried and abused. I had a jambalaya dish of sorts that was decent – a bit too salty. Afterward we got a couple “like-its” from ColdStone like some whacked out fiends and fell asleep on ourselves. 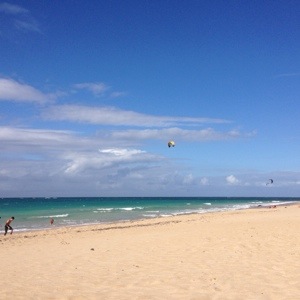 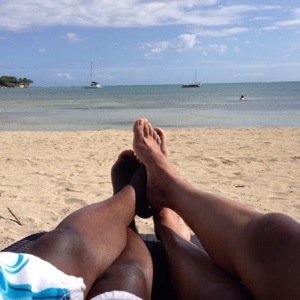 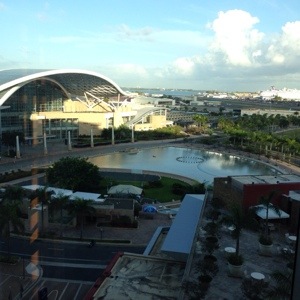