Yes, Jeni, we meet again! This time in Nashville, TN!

Pat and I knew we were headed out of town for Memorial Day Weekend, but we didn’t know where we’d land. Yesterday, he woke me up at 9am and said, “There’s a 10am flight to Nashville! Are you built for this?” I scrambled out of bed, dashed back into Friday’s clothes, patted my hair into some semblance of not so crazy, and ran out the door. We jumped into a cab which is kind of unheard of in our hood… We got there too late. But it started a long day of deliberation. Where to go? Where to go? Hmmm … Puerto Rico was on the list. So was Asheville, NC to see the Biltmore. Who doesn’t like a walk on the beach or a mansion? But then Pat shows me the Jeni’s website – OMG she’s in Nashville now. Who knew! My mouth watered. I’d already been feenin for BBQ because I really want a rack of ribs on Memorial Day Weekend. Mmmm. Beautiful pink smoke rings. A chance to have Jeni’s fresh out of the tub just pushed my vote over the edge.

Here are some pics of our experience. Now Jeni has gravel, sauces and accoutrements. Just a few weeks ago I had been trying to decide if I was going to order gravel and have it shipped to my house.

Now here I was so I could try them. After sampling the Yazoo Sue, I decided on the following: two scoop sundae. One cloverton – creamy slightly sour cheesy just sweet enough. One brown butter almond brittle – crunchy sweet. Honey butterscotch, salty graham gravel, and hand whipped cream. I loved the butterscotch and gravel. Perfect touches. The whipped cream was overkill. Unfortunately it was slightly over whipped. It wasn’t sweet which was complementary to the sweetness in the ice cream. I just think I was being greedy ordering it in the first place.

Jeni had two combinations posted in the store – the Moma and the something Knight. I wish she had posted more because even though I love the free spiritedness of making my own design, I’ve come to rely upon Jeni’s excellent flavor combinations.

Pat had cloverton and bananas and honey. Surprised he didn’t attack pistachio and honey. He had the same toppings minus the whipped cream. He gulped his ice cream and started eating mine. Thief!!

The line was still out the door an hour later. 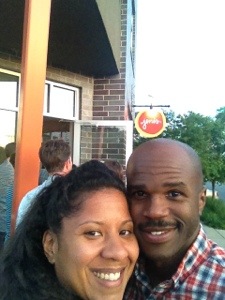 Let’s talk about Jack’s BBQ for a moment. My half rack of ribs smoked to perfection and smothered in the St. Louis mild sweet sauce were just lovely. Way too much food. Thank goodness I didn’t like the sides – green beans smothered in pork juice and baked beans smothered in sweet pork juice. Nasty beyond belief. This pic was taken just down the street. The music filled the street.